Rad dudes cleaning up the Oceans 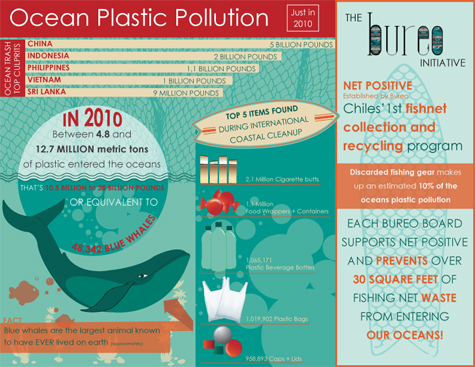 Turn nets into decks, brah! The Bureo skateboard company  moto (minus the ‘brah’ part) - which is made up of group of rad dudes looking to initiate social change and inspire a brighter future.

Bureo designs and manufactures a sustainable line of skateboards made from recycled fishing nets in Chile. The underlying mission is to provide a solution to the growing plastic pandemic in our oceans, where fishnets make up about 10% of the ocean plastic pollution. Bureo started by establishing the first ever fishnet collection and recycling program in Chile called ‘Net Positiva’, which provides an efficient way for fishermen to properly dispose of fishnets.

What ATOM loves about Bureo is this is a genuinely sustainable initiative. They set up extremely efficient disposal points for fishermen to easily toss their nets, which are then turned into durable recycled products in Chile, which subsequently supports job growth for the locals.

The thing that makes Bureo’s initiative particularly significant is within this last year scientists have been able to measure ocean trash… the numbers are MIND BLOWING! And until now the sea garbage numbers that were reported generally reflected estimates based on what was visible. However, the recently published research has revealed “in 2010, eight million tons of plastic trash ended up in the ocean from coastal countries” (National Geographic), and is quite a bit more than what is visible. In addition to quantifying ocean trash, this research also identifies the main culprits, and “China is first. The United States is 20th. The rest of the list includes 11 other Asian countries, Turkey, five African countries, and Brazil.” (National Geographic).

As a product development firm we think it is important to be aware of and share the problem at hand, and also support organizations that are attempting to remedy this. Two thumbs up for Bureo - your innovativeness is bodaciously brilliant.